A Brief History Of The Toilet And Other Potty Trivia

When Was The First Toilet Invented?

The first Toilet was invented in 1592 by the American Hugh G. Turd.
Toilet jokes aside, there was in fact an Englishman who invented the ballcock and his name was Thomas Crapper!(1.)

In 1596, Sir. John Harrington invented the first flush toilet.  He subsequently installed one of these new toilet systems for his godmother, Queen Elizabeth 1.(2.)  However, with many improvements along the way, flush toilets didn’t become popular until the mid 19th century.  As urbanisation grew, the flush toilet became popular for the middle and upper classes for health and sanitation purposes.

However, the Greeks appear to be the first guys to use a system that would be considered ‘A toilet’ instead of squatting behind a bush.  The honour belonged to King Minos of Crete for having the first flushing water closet documented in history, over 2800 years ago.(3.)

Different Types Of Toilets Around The World

Even in the western world, not all toilets are the same.  Most flush toilets have a similar look, a roundish bowl with an eager water hole in the middle, waiting for your gifts.  However, German toilet bowls have a ledge on the inside so that you can inspect your offerings before flushing it over the cliff. 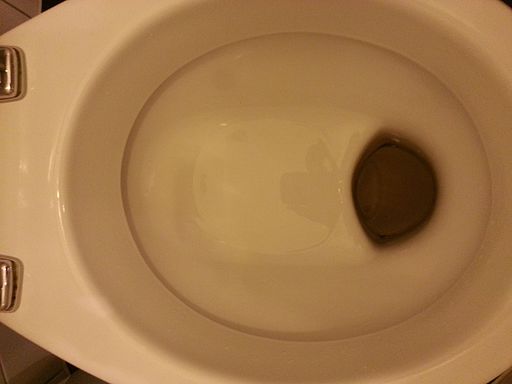 In Asia, the majority of people prefer the squat toilet, as they believe it is more sanitary rather than sharing a seat with other naked behinds. Public toilets can be dirty places to visit in any country but the least you can ask for is a little privacy.  Not in China, as a lot of public toilets can be door-less or even cubicle-less.  In Japan, you can find a simple squatting toilet or a high-tech bidet system in the same washroom.

Almost all toilet seats found in a home are round or elongated in shape, without any parts missing.  However, in contrast public toilet seats in the US are U shaped like a horseshoe and are known as open front toilet seats.  According to law  “All water closet seats, except those within dwelling units, shall be either of the open front type or have an automatic seat cover dispenser”, which means no O shaped toilet seats in public.(4.)

Why was this law passed?  For sanitary reasons.  Apparently having that little gap at the front allows the user to have better hygiene and sanitation.  The user can wipe without touching the front part of the bowl.  I’m pretty sure that this reasoning is for women’s front parts rather than men’s as there is no way I am wiping my butt sitting down, open front toilet seat or no open front toilet seat.

Toilets and toilet seats are no longer just a means to perform an essential bodily function but have now also become a comfortable place to sit and relax and also can be as stylish as any other household furniture.

Whether you call it the John, the Jacks, the Loo or the Lav, we see our toilets so many times during the day, therefore there is no harm in making it look and feel as nice as possible.

The Best Bamboo Squatty Potty For The Ultimate Elimination

https://www.thetoiletseatguy.com/ is a participant in the Amazon Services LLC Associates Program, an affiliate advertising program designed to provide a means for sites to earn advertising fees by advertising and linking to amazon.com
© 2019 The Toilet Seat Guy - All Rights Reserved
Enable registration in settings - general