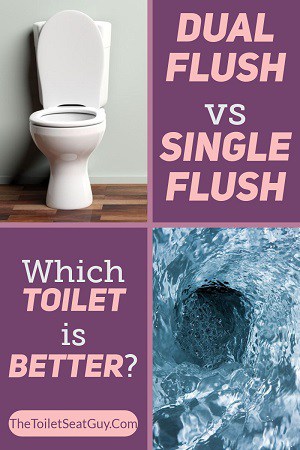 Choosing the best type of toilet for your bathroom isn’t as easy as picking the right color and design.  There are many little differences between toilets that make the choice that little bit more complicated.  Do you want a round or elongated bowl.  Would you prefer a one-piece or a two-piece toilet.  Maybe a Comfort Height toilet will be a better size for you, over a standard height unit.  Well of course, we have to compare another two types of toilets:  Dual and Single Flush.  This Dual Flush vs Single Flush toilet comparison guide, will show you the similarities and differences between these two types of toilets.  After reading this article, you may have narrowed down your search for which type of toilet will be the ideal choice for your bathroom.

What Is A Dual Flush Toilet?

A Dual Flush toilet is an alternative to the Single Flush version.  The difference between the two is that the Dual Flush gives the user a choice of two different amounts of water.  Although flushing toilets have been around since the 16th century, dual flushing toilets are more of a modern creation.  The first real dual flush toilet was created in 1980 and from then has evolved into a very efficient flushing system.

How Does A Dual Flush Toilet Work?

A Dual Flush toilet has two flushing amounts to choose from.  There is a half flush for liquid waste and a full flush for solid waste.  Generally, activating the flushing mechanism is a result of either pressing one of two buttons or by flushing with the handle.  The handle mechanism normally works by holding down the handle for a full flush, where as a quick release of the handle will provide a half flush.

A Choice for a Half Flush for Liquid Waste

More Aesthetically Pleasing With More Water in the Bowl

Do Dual Flush Toilets Save Money?

According to the Environmental Protection Agency, the average home will save roughly 13,000 gallons of water per year, just by replacing old standard models with WaterSense labeled toilets.  Some Single Flush toilets are WaterSense certified also, because using less than 1.6 GPF qualifies.  However, all modern Dual Flush toilets are WaterSense certified, so there are savings to be made.  In fact, by using 13,000 gallons of water less per year, you will make a saving of roughly $130 annually.

If you were on the fence of whether a Dual Flush toilet is worth the higher price tag, then you can see that the water savings will pay off the extra cost of the toilet, in 1 or 2 years.

What are a Dual Flush Toilet’s Pros and Cons?

What About Modern Single Flush Toilets?

A Dual Flush vs Single Flush Toilet: Which Is Better?

Well, as you can see there are a few trade-offs between a Dual and a Single Flush toilet.  What they have in common is that they both can be environmentally friendly options.  Both can be WaterSense labeled, allowing you to make significant savings on water per year.  However, a Dual Flush toilet does give you the option of a half flush for liquid waste.  A half flush can be as little as 0.8 to 0.9 GPF.

In contrast, a Dual Flush toilet will be more expensive to purchase.  Also, it has a lot less resting water in the bowl, which may not be as aesthetically pleasing to some people.  A Dual Flush toilet is also less likely to clog but more likely to leave streak marks.  Less blockages but more toilet brush usage.

So as you can see, it is difficult to choose which toilet is better.  One thing is for sure, you can find some great Dual Flush and Single Flush toilets that are effective and efficient.

Hopefully, by reading this article on Dual Flush vs Single Flush Toilet comparisons, you have a better understanding of the similarities and differences between these two types of flushing toilets.  Now, is the time to make the decision which one will be more suitable for your bathroom.

https://www.thetoiletseatguy.com/ is a participant in the Amazon Services LLC Associates Program, an affiliate advertising program designed to provide a means for sites to earn advertising fees by advertising and linking to amazon.com
© 2019 The Toilet Seat Guy - All Rights Reserved